One Year of Equality

One year ago today, marriage equality came to New Jersey.  It was a long struggle, and a difficult one, but for the last year, everyone in New Jersey has had the same right to be with the person they love.  Over my twelve years in the legislature, I am proud of the strides towards equality that have been made. 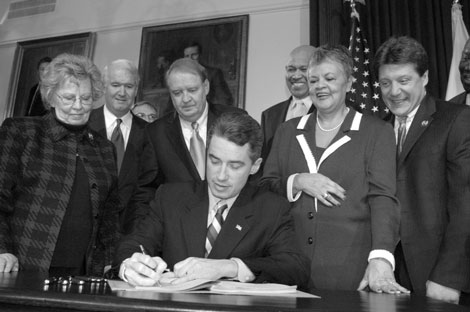 In my first session in the legislature, we were able to secure domestic partnership benefits, and passed anti-bullying legislation that included protections for bullying based on sexual orientation and gender identity and expression.  From that time, through the numerous votes, vetoes, and court rulings that led up to winning marriage equality, it has been a great privilege to help create a more equal New Jersey.  Below are the comments I made on the floor in 2012 before the Assembly passed S1- our marriage equality bill, which was unfortunately vetoed by the governor.

To all those happy couples celebrating their first anniversary today, Ann and I would like to extend our most sincere congratulations!